The old headlights, after we unpacked them, began to raise huge logistical issues. First of all, many of them were rusted, so we had to dismantle them piece by piece, sandblast and prime them so they wouldn’t rust again.

The glass of the old headlights was tinted from oil and other substances so that meant every piece of glass had to be cleaned manually, everything put back together and even polished. Some of them were even cracked. This is a labour intensive job. Almost every step was done manually. So we stopped that as it will take either tonne of money or years to complete. Now we are working with a company that is developing some tools to make this automated, therefore much faster.

THE MOULD FOR THE BODY

First, we started with an aluminium mould that was faster to produce (2 months), but it lasts for a lower number of injections. Because the number of Lampsters/ Lightsters increased, we cancelled that one, and we switched to a new mould( this one is taking three months to manufacture), made from a harder alloy, that would hold up to 100.000 units. Otherwise, we would have had to make a new mould for every 15.000 units.

The new mould is 75% ready, and it should be finished at the end of August. After that, the mould would be able to produce thousands of bodies per week.

Even if it raised a lot of issues for this type of production, we still used the recycled plastic, and the Lampsters/ Lightsters will come with a certificate for that.

We are apologising for the lack of updates, but there was a tonne of work and a lot of problems to resolve.

We’ll post updates more often from now on, at least once a month!

We try to answer as fast as we can to all the emails, messages and comments, sometimes more than 500 per day. So maybe sometimes we are exhausted, tired and lack the same physical enthusiasm from the beginning, but we are fully committed. We started with an incredibly designed product, and we will end with the best design, the best lighting system and the best electronics in a lamp, on the market.

Again, thank you very much for your patience and for the support messages we’ve received.

The producent van The Lampster ! 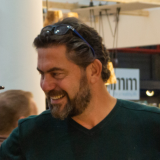