The price a piece, for larger quantities you can contact us via Mail to BINK

Design by Curt Fischer
Origin: Germany
Salvaged in Bangladesh from a 1940s ship
Producer Midgard: "Good to see that our designs are emerging so beautifully after decades at sea".
Circa: 1946-1949

Midgard comes from Nordic mythology and is the human world surrounded by a primordial ocean. This is where the world snake lives, which is so gigantic that it encompasses the whole world and bites its own tail. source: wikipedia

Curt is the first designer to design an adjustable lamp. The first designs were conceived well before the mythical and very expensive GRAS lamps. Midgard lamps were a great success at the prestigious Bauhaus school.

These are neatly restored Midgard scissor lamps. Ideal as an object on the wall, highly adjustable and pivotable. This lamp is therefore extendable and has an adjustable head, just in front of the shade.
These lamps are equipped with original copper wing nuts. Furthermore, this lamp can pivot on the base. 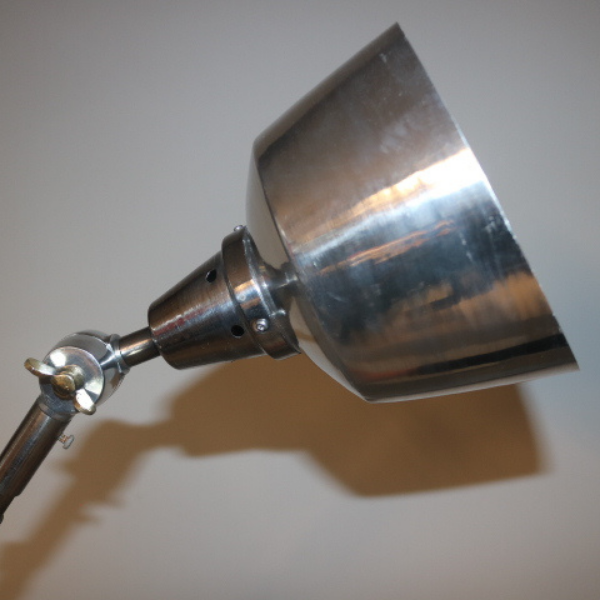 The designer Curt Fischer (1890 - 1956) is believed to be the first designer of adjustable lighting. He is also the founder of the company Midgard .

His first designs date from 1919, so even before the mythical Lampe GRAS luminaires from France.
The first Midgard units appear at the machines of Ronneberger & Fischer and in its factories in Auma (Thuringe, Germany). The first lamps were really commercialized in 1922. The lamps were then marketed under the name Midgard. His designs such as the scissor lamp, for example, set the tone for a series of high-quality, robust and aesthetically beautiful work lamps that came into their own in rough factory buildings as well as in an office. Thanks to many different mounting systems, the lamps could be used on metalworking machines, in sewing workshops, at architects' drawing tables and in offices. While the basis of the model remained the same, an adapted foot could be chosen, depending on the working environment.
The lamps were very successful and were even used in the workshops of the prestigious Bauhaus school . The director at the time (1923-1925), Walter Gropius was a big fan of this model (source: 1000 Lights)

“We later envied the inventors of the Midgard lamp’s arm. Our lamps were adjustable too, but they simply weren’t as elegant.”

There are no reviews yet.

This website uses Akismet to reduce spam. See how your response data is processed .